The WSVD (Russian: Снайперская Винтовка Драгунова, Snayperskaya Vintovka Dragunova; English: Dragunov Sniper Rifle) is a Soviet semi-automatic sniper rifle chambered in 7.62×54mmR, designed as a squad support weapon. Upon introduction, it had beat out all other contestants and was accepted into service with the Soviet military with serial production beginning in 1964. The SVD is issued with a quick-detachable PSO-1 optical sight.

The Al-Kadesiah is the Iraqi variant of the SVD. While cosmetically similar to the SVD, it is essentially a hybrid of the SVD and Romanian PSL rifles and has some key differences with the SVD that prevent parts interchangeability between the two rifles.

The Al-Kadesiah is a sniper rifle featured in Insurgency: Modern Infantry Combat.

The SVD is a sniper rifle featured in Insurgency: Sandstorm. 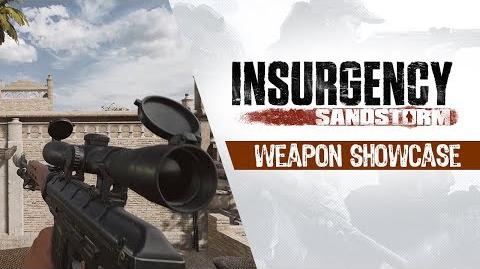