View source
watch 01:36
We're Getting Mutants in the MCU - The Loop
Do you like this video?
Play Sound

The M40A1 rifle is a bolt-action, internal magazine-fed sniper used by the United States Marine Corps. The M40 was introduced in 1966 as modifications from the Remington Model 700 rifle. Sometime in the early 1970s, the USMC armorers began rebuilding the original M40s into M40A1s.

The M40A1 is a sniper rifle featured in Insurgency. It is only available to the Security Forces' Designated Marksman and Sniper classes in multiplayer. It has a 5 round internal magazine that is reloaded via single rounds.

The M40A1 excels at long range engagements due to its high accuracy, power, and low cost that allows it to equip more attachments. However, the M40A1 has poor effectiveness at close to medium range engagements, due to its slow rate of fire and small magazine. These shortcomings generally make the weapon a poor choice in most situations, and should be only used on maps with long view distances and open ground.

Due to the narrow niche of the M40A1, players should familiarize themselves with the aiming mechanics before equipping the weapon, as failing to harness the capabilities of this weapon is highly detrimental to the effectiveness of the player to the team and even their own personal scores. This weapon is best used as a support weapon for long-range. More experienced players can use this weapon effectively even at close range, usually switching to their secondary upon firing the first shot.

The iron sights of the M40A1 are quite clear, and is even more effective with optics. It also has a slight advantage over the Mosin Nagant in it's bolt action animation. The soldier never takes his eyes off the scope when racking the bolt, making follow up shots with the M40 much easier. 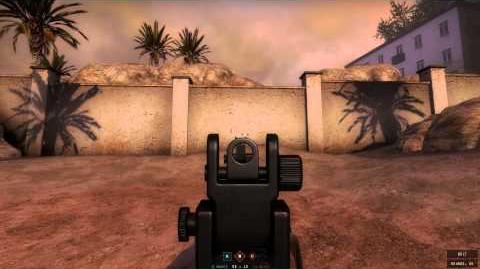