Buhriz is a map featured in Insurgency and Insurgency: Sandstorm.

Buhriz is also a real life Iraqi town located 25 miles north of Baghdad. The town is located along the Diyala River.

Buhriz is a map featured in Insurgency: Molotov Spring. Buhriz takes place in the outskirts of Baghdad along a major river. Insurgents fortified a small village against a force of attacking Security Forces, who must fight along the river's edge and along the main road into the village itself.[1]

Buhriz Night, a night time variant of Buhriz, was added to Insurgency as part of the Nightfall DLC. 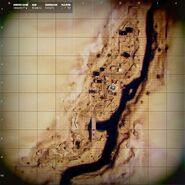 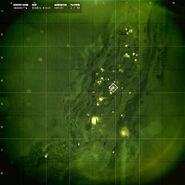 Security Forces assault Insurgent Forces over the bridge and through the town of Buhriz to capturing objectives and destroy the Insurgent Armory supply cache. 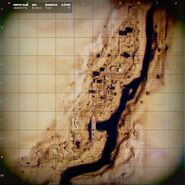 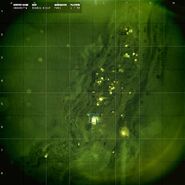 Security Forces deploy outside a building located at the edge of town past the bridge. A two-story building is located between Alpha and the deployment before the bridge.

Alpha is located on the Buhriz side of the bridge. Alpha's capture zone includes the entire sandbagged checkpoint, sections before the checkpoint's short concrete walls, and abutment of the bridge closest to the town.

Charlie is a two-story radio station. Charlie's capture zone includes the radio station's interior and the semi-enclosed stairs away from the Security deployment.

Delta is a supply crate is located behind the Insurgent Main Armory near some dumpsters. The armory is a large two-story building at the end of the Buhriz main road before the roadblock. It is equipped with workstations to produce a large quantities of IEDs.

Security Forces assault Insurgent Forces through the town of Buhriz to destroy the Insurgent's supply cache. 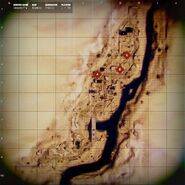 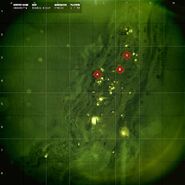 Security Forces deploy under the bridge.

The Alpha supply crate is housed in an otherwise empty green-lit shack. It is one of the last buildings along the Buhriz main road.

The Bravo supply crate is in the only home with the daylight basement, though the basement is inaccessible to the player. The home features a balcony connected to a neighboring building via a makeshift crosswalk. The home's interior has a disassembled DVD player and bed.

Security Forces deploy on the southern beach head via commando boat. Their operation consists of capturing seven objectives in order, starting with Alpha on the eastern beach, moving north to Bravo and Charlie, then along the western ridgeline to Delta, following the main road to Echo, and across the bridge to Foxtrot and Golf. 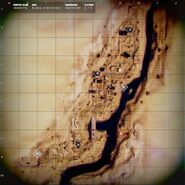 Hunt is a game mode featured on Buhriz Night. 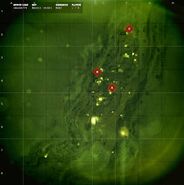 "Buhriz, originally created by Majoris, was one of my first big jobs on Insurgency. Doing a remake of this map was quite a challenge, mostly due the long view distance and high expectations from the community. The map wasn’t done entirely from scratch, however several parts are heavily reworked. For example, the Buhriz Bridge has received a complete overhaul to keep it more close to its original real-life design. Additional credits: Jeremy Blum, Majoris and Insurgency team."
— Jeroen "Xanthi" Van Werkhoven, Insurgency Level Designer[2]

A photo of Hurg found in a building near the dock.

Tideway is an upcoming map in Operation Nightfall update for Insurgency: Sandstorm. The map is a remaster of the Insurgency map.